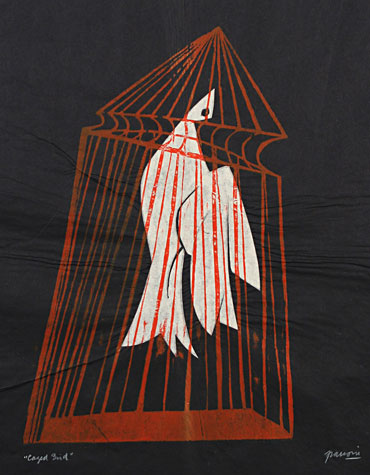 “I know what’s different about you,” I say to my sister on our last walk.

“What?” She smiles with those big pink lips. The kind of lips women envy.

“In a couple weeks.” She says.

She skips ahead of me. Her long brown hair flowing behind her like a kind of
freedom.

“I can’t wait to start my own life!” She squeals. “Hurry, get over here and
grab my hand.”

We pray right there in the middle of the trail. We pray for transformations
and smooth departures.

We pray for still waters and flourishing futures.

My sister never got the chance to sign those divorce papers.

Her soon to be ex-husband murdered her two days after that walk.

We were going to have a surprise shower for her.

We were going to fill her new home with love, love, love.

So much love that she would drown inside of it, swallow it whole.

None of that happened.

He left work early on May 26th.

He said he had business to attend to, appointments to keep, phone calls to
make.

He was never a man, so I shall call him The Murderer.

After all, that’s what he became in the end.

The Beretta pistol was so minuscule, the murderer could conceal easily inside
the palm of his hand.

I imagine he rubbed the iron between his fingers anticipating her absence,
his absence, his final control.

I imagine he tasted the metal upon his toxic tongue.

I presume he was prepared to go strait to HELL.

My sister came home from work at about 5:00 pm.

She had the same routine every day of the week.

She’d change from scrubs to walking clothes, hoist her hair in a high
ponytail. She’d call our dad to meet her on the Waterfront Trail.

“I’ll see you on the trail in five minutes, Dad.”

You see, we were tangled and twisted together as one.

The same blood from the same root.

He had already locked the front door so she couldn’t escape.

Perhaps he uttered a prayer to whomever murderers utter prayers to. Perhaps
he gave last rights to himself.

I often wonder why God didn’t intervene. Why He’d allow the cage to remain
closed.

There were two options. She stayed with him or she died with him.

He placed the gun to the back of her head as she walked out the door.

And shot once…twice…and a third time.

He had to make damn sure my sister never gained consciousness, had to make
certain she couldn’t fly away.

He then wrapped his arms around her like a snake and shot himself in the
right temple.

I remember asking my husband a few months later, “Did he really kill Kay? Is
it true?”

“Then why am I breathing? Why am I walking? How can my heart still beat?”

People have frequently alleged that a caged bird sings.

The caged bird cannot sing until she is set free; she cannot form a pleasing
melody of verse until the cage is swung wide open.

Sometimes in my dreams, I hear my sister singing.

I see her hair flowing like a dark water through air.

I call out her name.

Where are you? Why didn’t you tell me you were leaving?”

“You know where I am.” She whispers softly, slowly…

Because I know she is finally free.

My Sister Kay was Murdered on May 26, 2010.  Everything changed in one. solitary.  moment.

My God Shall Raise Me Up.

My Mother Bakes Cakes With Buttermilk