~As soon as we land in Vegas,  a hundred cell phones begin beeping, clicking, singing.

People cannot wait to connect with the external world.

Mr. Liverpool is on the phone while the plane is still rolling on the runway.

“What?  You mean they had to amputate it?”  I hear him saying.

The passengers around him gape as he talks.

“ Four hundred dollars?  That’s fine.  You did the right thing.”  He says consolingly.  “What part did they need to cut off?”

My heart thrashes in my chest.

He gets off the phone and looks at me.

“Charlie had to have one of his toes amputated.”

The blonde chick sitting next to him asks, “Who’s Charlie?”

God only knows what happened.

“I think he climbed up the screen door and got stuck,”  I tell Mr. L.

You see,  several times I’ve had to physically remove him off our screen door when he’s climbed up…. and his four paws are spread out like  this: 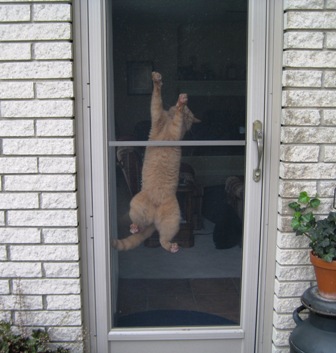 Charlie is rather naughty & disobedient.

For one thing, he doesn’t meow to communicate like other normal cats.

Instead, he scratches on our new velvet couch.

Not only does he scratch, but if he’s angry about something (for example, if he’s not fed his Meow Mix on time.)  he may stroll near you, lift his tail,  and piss on your leg, head, purse, or shoe.

Yep.  You heard that right, Sister.

Apparently—my son  had the nerve to ignore him, and Charlie jumped on the couch directly above Alex’s head and pissed all over his curly hair.

Thus, it’s Wicked Charlie dumping the garbage can down to rummage through the chicken bones, pork fat, tuna oil,  or any left over shit  that’s been tossed away.

–Charlie in cone head so he does not bite his stitches.

—–Dear, Reader,  are any of your pets as wicked as our  Charlie?

Believing in Your Story, Your Vision, Your Life