~~ Every once in a while, I get this urge to get on my soap box and give the world a piece of my mind;  to run to the window and scream bloody murder,” I’m Mad as Hell and I’m Not Going to Take it Anymore!”

This is one of those times.

I am soooooooooooooooooooo sick of these idiotic, absurd, ghastly, disgusting, noncontributing, foolish, brainless,  and revolting- so-called-celebrities making the news for NOTHING,  being famous for NOTHING.

In case you haven’t heard…..there’s a little war going on in Afghanistan.  Our health care plan is in the shit hole without a paddle.   We are about a GAZZILLION dollars in dept.  And more than that, millions of people are dying every single day from unclean water, violence, terrorism, hopelessness, oppression, and starvation.

Paris Hilton strutting into a Christmas party with her Gucci dress and Jimmy Choos–twirling her hair around her finger as if she’s the fuc%#ing Queen of England. 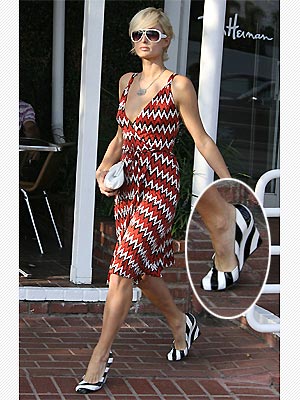 Come on, this girl is only famous for having money, blonde hair, and revealing her muffin.

What else do we see?

Kate Gosselin — is hosting the “The View!”  Are you damn well kidding me?  THE VIEW?  Goslet is on 20/20, Larry King, Nancy Grace, 60 Minutes.; Gosselin is being interviewed by my hero, Barbra Walters, as one of the most fascinating people of 2009; even my Anderson Handsome Cooper is rambling on  about her on his show.  I’m ashamed of you Anderson.  Bad , bad boy!

I mean, this freak-show of a woman had eight babies.  That’s what she did. She reproduced.  She gave birth.  A woman does this from time to time.  I did it.  Do you give a flying shit?  Do you desire to watch me on CNN because I delivered my two, (may I say softly and humbly), beautiful boys?  Nooope.

Don’t even get me going on her idiotic-cheating-good-for –nothin’ husband.

His achievement:   He gave Gosselin  a bit of his slimy-slippery- sperm.

SO WHAT!  WHO CARES!  What is he legendary (in his own mind)  for?  If you can tell me, I’ll stop writing this blog immediately.

And then, last but not least, there is the annoying as hell, nauseating family– “The Kardashians.”  Sounds like a freaking appetizer.  Well, perhaps, it is.

An appetizer that is so overwhelming, over-filling and exasperating that it makes you want to throw up directly after you consume it.

So there’s Kim, Khloe, and Kourtney, and I can’t seem to figure out what they do or why they’re admired and famous.  Did they win the Nobel Peace Prize?  (No, that was Obama).  Did they donate to some great charity or make a contribution to society in some wonderful way?  Did they do anything besides begin a reality show called “Keeping up with the Kardashians,” which we can’t possibly keep up with because the superficiality is so thick and unbearable that it makes one want to commit suicide from all of the plastic boobies and fake eyelashes pushing against our faces.

And what’s up with the damn mom?

My suggestion is: Go to the window right now.  Open it.  And Scream Loudy,

How To Survive One More Day

The Monster in Her Bed